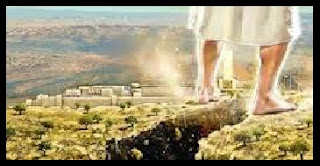 "Then I looked, and there before me was the Lamb,
standing on Mount Zion, and with Him
144,000 who had His name, and His Father's name,
written on their foreheads." Revelation 14:1


In this passage, Jesus is making an appearance to the 144,000 who had been sealed (in chapter 7). They  worship before Jesus and before the Throne and "sing a new song" to Messiah that "no one could learn" except for them. (Keep in mind that this is not the "Second Coming" of Christ to the whole Earth, that happens in Revelation 19:11 we'll be there soon!).

A significant passage of Old Testament Scripture parallels today's verse regarding the return of Messiah to Earth:

"On that day His feet will stand on the Mount of Olives, which
faces Jerusalem on the east. The Mount of Olives will be
split in half from east to west, forming a huge valley,
so that half the mountain will move to the north and
half to the south." Zechariah 14:4 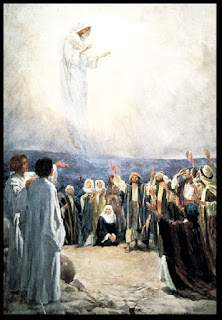 "After He had said this  this, He was taken up as they were watching, and a cloud took Him out of their sight. While He was going, they were gazing into heaven, and suddenly two men in white clothes stood by them. They said, “Men of Galilee, why do you stand looking up into heaven? This Jesus, who has been taken from you into heaven, will come in the same way that you have seen Him going into heaven.” Acts 1:9-11


Reflection: Consider the Old Testament prophecies (regarding the end of the age & the return of Christ) and the words of Jesus with the book of Revelation, and meditate on how they fit together perfectly. You can trust in God's word to be true.