Mar 01: About the Book of Revelation
Carri Lynne Pratt

“Write on a scroll what you see and
send it to the seven churches.” Rev 1:11

Let’s discuss what this book is about and how it came into existence. 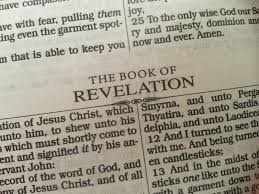 First, you should know the author is John, not John the Baptist (he was beheaded before Jesus’s death and resurrection) but by John the Apostle who referred to himself as “The disciple whom Jesus Loved.” John 13:23.

This is the man who wrote the Gospel according to John, the books I, II & III John as well as one of the most quoted verses in all of the Bible, John 3:16. He was one of the original twelve apostles and was the brother of James. (Matt 10:2) He also had the great honor of being in the "inner circle" of apostles (Peter, James and John) who witnessed the transfiguration of Jesus on the mountain recorded by Matthew, Mark and Luke. (Matt 17:11, Mark 9:2 and Luke 9:28)


Tradition has it that Roman Emperor Domitian ordered that John be executed by throwing him into a vat of boling oil. However, when John did not die, Domitian had him exiled to the Island of Patmos. It was on Patmos that John had a prophetic vision and was told to write down the book of Revelation.

Next it is important to understand that this prophecy was revealed to Jesus by God, then given to John by an angel of the Lord. (Rev 1:1)

Although it was directed to the seven churches, it applies to every person who ever was, is, or will be a servant of Jesus Christ, in other words, anyone who has taken Jesus Christ as Lord and Savior should pay close attention to what is being said to the churches because we can find applicable truth for our lives.

This book is widely considered to have been written in approximately 95 AD which would be either 62 or 65 years after the death and resurrection of Jesus (30/33 AD - debatable). Therefore, the seven churches are the first Christian populations located in the named cities of Ephesus, Smyrna, Pergamum, Thyatira, Sardis, Philadelphia and Laodicea.

Finally, you the reader are promised a blessing for merely reading and heeding the words of this prophetic book. Therefore, many blessings to you for joining us over this Lent season!


"Blessed is the one who reads and blessed are those who hear the words of this prophecy and keep what is written in it,
because the time is near!" Rev 1:3