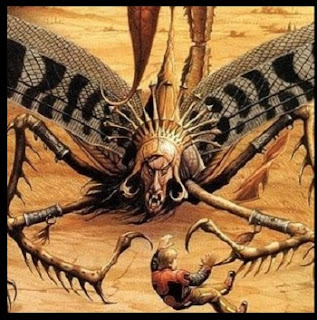 "Then from the smoke came locusts on the earth, and they were given power like the power of scorpions of the earth.  They were told not to harm the grass . . . but only those people who do not have the seal of God on their forehead." Revelation 9:3-4


The Fifth Trumpet: The first Woe! is a horrifying animal that has been living in the Abyss. An Abyss is "a deep hole, so deep that it seems bottomless." (gotquestions.org) Luke's gospel records a conversation between Jesus and a demon who begs Jesus not to send the demons back to the Abyss:

"Jesus then asked him, "What is your name?" And he said, "Legion," for many demons had entered him. And they begged (Jesus) not to command them to depart into the abyss." Luke 8:30-31

We are also given the name of the king over them, in Hebrew it is "Abaddon" and in Greek it is "Apollyon" which literally means destroyer. There is debate over whether this is Satan or one of his demons.

Reflection: Ladies, the urgent message from today's reading is that we desperately need God's protection. Not simply for this future time period, but for daily life. We are living on a spiritual battlefield and Woe! to those who fail to put on the armor of God.

"Put on the whole armor of God, that you may be able to stand against the schemes of the devil. For we do not wrestle against flesh and blood, but against the rulers, against the authorities, against the cosmic powers over this present darkness, against the spiritual forces of evil in the heavenly places."  Ephesians 6:11-12