I have heard it said that it takes an average person seven times to be exposed to the gospel in some way to make the final decision to become a Christian.
Recently I had the privilege of being a tool in God’s hand as He led me to a sales representative who was kind enough to help me find something I needed for our family vacation.  As this man assisted me I felt a strong tugging from the Holy Spirit.  I listened for an opening in the conversation to share whatever it was that God wanted me to share.

We began talking about an article that he had recently read and there it was, the

opening.  He began telling me that he researched many different religions and I asked if he believed if the Bible was true.  He said yes.  Did you know Jesus himself said He was the only way to salvation? I asked.  I then quoted from John 14:6, Jesus answered, “I am the way and the truth and the life. No one comes to the Father except through me.”

He looked at me and we made a spiritual connection.  I asked him where he would go if he walked out of his store that night and was run over and died.  “Hell” he said.  I looked at him and asked him if he wanted to make sure that he would spend eternity with God.  He said yes.  My heart lept with joy. 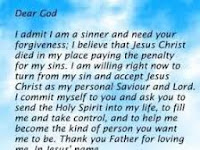 I then asked him if he wanted to pray with me and he said yes!  Right there, at the end of the aisle, in the middle of the store, we prayed together and he accepted Jesus Christ as his personal savior.  God is so good!

I asked him to please read the book of Mark and told him my family would be praying for him. I also gave him a big hug and welcomed him as my brother in Christ. (yes, I did tell my husband I hugged a complete stranger)

Later he shared with me that he had been approached twice before by an evangelist who had invited him to Easter services.  He said he began doing research and everything was falling into place for him.  I just happened to be in the right place at the right time for him to make his decision and I was obedient to God’s prompting.

The take-away is this – every touch counts towards helping our brothers and sisters towards eternal salvation.  You could be the first touch, the fifth touch, or you could have the awesome privilege of being the last touch that God allows to lead a precious soul in the salvation prayer.

Challenge:  Pray for an opportunity to share the Good News and then be obedient to God’s prompting through the Holy Spirit that truly does live in you.  You could be the seventh touch.