Esther; For Such A Time As This Chap 8

Esther; For Such A Time As This   Chap 8
Carri Lynne Pratt 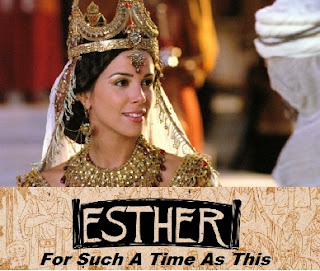 "And in every province and in every city, wherever the king's command and his edict reached, there was gladness and joy among the Jews,
a feast and a holiday" Esther 8:17


This week our reading is from Esther chapter 8.  Read Here Listen Here

We read that Esther's people are in peril, even after Haman had been put to death. There was still an edict pending to put all of the Jews to death on the thirteenth day of the twelfth month, which is the month of Adar.  This was to be a genocide of the Jews as horrific as that of Hitler's decree.

However, once again Esther uses her position to plead for her people and get the king to create a new edict allowing the Jews to fight back in self-defense.

As you read/listen this week consider the following:

The Jews rejoiced at the news that they could fight back against the evil people coming against them.  Imagine the relief they felt.

It is easy for us to lose sight of the power we have through the Holy Spirit. This power makes us more than able to fight against Spiritual Warfare.  It might not be flesh and blood coming against us but we must always remember that  Satan and his spirits are real and want to destroy the people of God.


"Be sober-minded; be watchful. Your adversary the devil prowls around like a roaring lion, seeking someone to devour." 1 Peter 5:8

You can fight back!  Rejoice in the fact that you have been given power by God:

Spiritual Meditation: "Submit yourselves therefore to God.
Resist the devil, and he will flee from you." James 4:7

Email ThisBlogThis!Share to TwitterShare to FacebookShare to Pinterest
Labels: Esther