The Words of God Giveth Life

There is no message greater or that can give more life than the word of God.

Scripture is God breathed, it is alive and active.
Jesus is truth and he is the word of God.

No amount of education or self-help book can do what God's word can do for you. When you find yourself in a tough situation, have questions or a big problem, God's word has your solution.

Those that set out to debunk the Word of God end up transformed by it instead.

"For the word of God is alive and active. Sharper than any double-edged sword, it penetrates even to dividing soul and spirit, joints and marrow; it judges the thoughts and attitudes of the heart." Hebrews 4:12

"The Word became flesh and made his dwelling among us. We have seen his glory, the glory of the one and only Son, who came from the Father, full of grace and truth." John 1:14

A Blessing For You

Are You Ready For A Blessing? 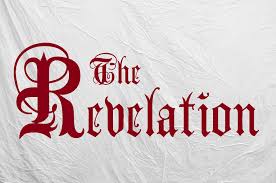 Have you ever wondered about the mysterious book of Revelation? Just so you know, every person who reads or hears the words of this book is promised a very special blessing:


"Blessed is the one who reads aloud the words of this prophecy and blessed are those who hear it and take to heart what is written in it, because the time is near." Revelation 1:3

Join us beginning on Wednesday, March 1, 2017 as we read through the entire book of Revelation, one day at a time, 10 minutes a day, during our spiritual journey of the Lent Season leading up to Easter.  Ponder what Jesus wants you to know.  He will personally reveal His truth to you.

This study will be mostly a "read and reflect" rather than an in-depth study on the many different interpretations of the symbolism found in Revelation. (Beth Moore and Kay Author both have great studies like those if you are interested in symbolism)  A "read and reflect" study means you will be given a short daily reading along with a couple of questions to meditate on during the day.  We are going to find out how the book of Revelation applies to every single person on earth, including us!

Discover for yourself the truth about the return of Jesus Christ, what will be happening during that time period and receive the blessing God promises to all who read these sacred passages of Scripture.

Looking forward to sharing this season with you,
Your sister in Christ,
Carri Lynne Pratt
No comments:

The Holy Spirit is a very real person and equally important part of the Trinity. When there has been a true transformation in hearts, the Holy Spirit comes in and separates us from the sin that so easily entangles.

Evidence of the Holy Spirit living in you:
Peace & Security instead of Chaos/Rage/Fear
Yielding to His Leading and Let Go of Control
Hope is in God, Not Man
No Other Idols Before God
Bearing His Fruit. Fruits of the Spirit (Galatians 5:22-23)

"If you love me, you will do what I command. And I will ask the Father, and he will give you another Counselor to be with you forever- the Spirit of truth.
The world cannot accept him, because it neither sees him nor knows him. But you know him, for he lives with you and I will be in you." John 14:15-17

"They claim to know God, but by their actions they deny him. They are detestable, disobedient and unfit for doing anything good." Titus 1:16

One of the most helpful things in my life has been to stop defending myself in my own power.

Allow God to defend you and trust him at his word. Doing this in full faith we get to see his hand in our circumstances, but we also stop pushing people away from us by being so abrasive.

Put on the full armor of God each day. God's word is our sword and the source of all truth. Faith is our shield.

"Finally, be strong in the Lord and in his mighty power. Put on the full armor of God, so that you can take your stand against the devil's schemes. For our struggle is not against flesh and blood, but rulers, against the authorities, against the powers of this dark world and against the spiritual forces of evil in the heavenly realms.
Stand Firm then, with the belt of TRUTH buckled around your waist, with the breastplate of RIGHTEOUSNESS in place, and with your feet fitted with the readiness that comes from THE GOSPEL OF PEACE. In addition to all this, take up the shield of FAITH, with which you can extenguish all the flaming arrows of the evil one. Take the HELMET of SALVATION and THE SWORD OF THE SPIRIT, which is the word of God."
Ephesians 6:10-17 (emphasis mine)

Through the years I have struggled with certain relationships in my life. I had tried everything from praying God to change them, played the blame game, pointed out their flaws, complained & argued, and to the point of wanting to beat my head against the wall.

I could not seem to make any progress in these relationships. All the while I was being told through scripture to focus on myself, but I was too stubborn and thought my way was best. "If they would just stop what they are doing" type thing.

After I took a 30 Day Challenge (we have wrote about this before) It was revealed to me that I was constantly reacting defensively which was rooted in hurt and disappointment and only hurts relationships. My eyes were opened and I knew the answer was to humble myself and to leave them in God's capable hands.

That is when His PEACE entered my heart and home.

If another can easily anger you, it is because you are off balance in yourself.

"Give, and it will be given to you. A good measure, pressed down, shaken together and running over, will be poured into you lap. For with the measure you use, it will be measured to you." Luke 6:38