Like most parents I secretly struggled when my very young child prayed to accept Christ.  Baptize now or wait until my child was a bit older.  I was torn! 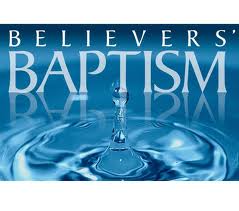 One side of me wanted to be known as the extraordinarily godly mom who had a holy child who just so happened to still be in preschool.  (That would reflect greatly upon me, right?)  The other side of me thought they were too young to really know what they were saying, that they didn’t know or have a complete understanding of  the real meaning of the sacrifice that was made them, that the sacrifice was being mocked by a child who just wanted to “go swimming” during church.
I was right in the middle of this tug of war over my daughter accepting Christ as her Lord, when God used something I heard in church to give me clarity.  My sweet daughter had been pushing to be baptized for months after she accepted Christ and every time her father and I would tell her that we were waiting for her to get a little bit older first.  But on that particular Sunday morning, my pastor reminded the congregation that the example of biblical baptism included immediate baptism - on the day of salvation the baptism occurred.   Refresh your memory with these examples:


·         The jailer who encountered Paul and Silas just after the earthquake in the jail was baptized along with his whole household, in the middle of the night, after the word of the Lord was spoken to him (Acts 16:25-33).


My whole perspective changed!  I was being a stumbling block to the relationship that the Lord was beginning to forge with my daughter.  I didn’t have control over the timetable of the work that God was doing in her heart.  Believe it or not, I am not supposed to be a third wheel in their relationship.  He called her, so she should go.
After sharing with my husband what God had revealed to me, we were in agreement.  The very next Sunday during the invitation she asked, AGAIN, to be baptized.  And she was.
“But Jesus said, "Let the children come to me. Don't stop them! For the Kingdom of Heaven belongs to those who are like these children."” Matthew 19:14