A Glimpse into the Heart of God

A Glimpse into the Heart of God
By Christie Crispin


The Father has taken our family on an incredible journey the past two years.  We were a normal family with 2 little boys and a brand new baby girl when God rocked our world.  One Sunday morning in March of 2010, God clearly spoke to me while watching a short video about a new ministry to orphans that our church would be partnering with.  “You will be going there.”  In the coming weeks, everywhere I looked, every song on the radio, every blog post someone linked to Facebook seemed to speak of adoption.  I finally decided to broach the subject with my husband, thinking that he would quickly tell me that we had 3 small children, I was nuts, and maybe we could sponsor another child or something.  When I called him to see if we could meet for lunch because I had something I wanted to talk to him about, he asked (before I mentioned anything!) “Is it adoption?”  I almost dropped the phone.  It is still amazing to think back to how God laid the same thing on both our hearts at the exact same time.  It was clearly from Him, and we weren’t going to ignore it.

In the coming months, we jumped into the adoption process.  God directed our steps as we chose an agency and a country program.  He knew that our son was waiting for us in Ethiopia.  We watched as God orchestrated the details of the timeline (even when it made no sense to us at the time) and stood in amazement as The Provider brought in every penny that was needed, exactly when it was needed.  Every.  Single.  Penny.  Shortly after we received our referral (were matched with our son), my husband lost his job.  It was during this time that God provided the bulk of the funds, showing that He was in complete control of this process, and didn’t need our help, only our obedience. 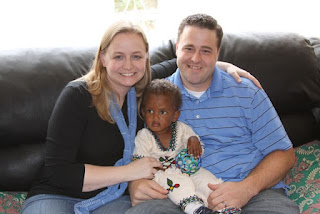 On March 27, 2012, our son, Eli, was placed in our arms.  He is no longer an orphan.  He has a mommy and daddy to love him, brothers and a sister to play with him, and grandparents and great grandparents to spoil him.  He also has a Heavenly Father that has known him since he was knit together in his birthmother’s womb, and knew that he would need a family.  He is the “Father to the fatherless.”  (Psalm 68:5)

Throughout this process, I believe we have gotten a glimpse into the heart of God.  He loves orphans deeply.  The Bible mentions countless times just how much He loves them.  He is their Father and Defender. (Deuteronomy 10:18)  Adoption is also an amazing picture of the Gospel.  We were helpless and trapped in our sin (much like our son could do nothing on his own to escape life as an orphan) when God adopted us.  “You have received a spirit of adoption as sons, by whom we cry ‘Abba, Father!’  The Spirit Himself bears witness with our spirit that we are children of God.”  (Romans 8:15-16) 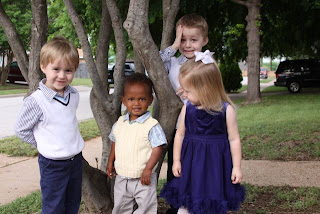 God has also shown us very clearly that the global orphan crisis is not an issue that He will allow us to overlook.  By some estimates, there are over 163 million orphans in our world.  God calls us to “defend the cause of the fatherless.”  (Isaiah 1:17)  As believers, we can’t pretend that we don’t know or that it doesn’t effect us.  “Once our eyes are opened, we can’t pretend we don’t know what to do.  God, who weighs our hearts and keeps our souls, know that we know, and holds us responsible to act.”  (Proverbs 24:12)  If we love Jesus, then what matters to Him should matter to us.  God may not call every family to adopt, but we can’t sit idly by and do nothing any longer. Have you prayed about what your family’s roll is in caring for orphans?

In light of Mother’s Day, I will close with something a friend of mine pointed out to me.  If God is the Father to the fatherless, and we are the bride of Christ, then wouldn’t that make us the mother?  Church, it is time for us to start taking care of our kids.